When a little over a year ago Google announced that previously-unseen „LIFE“ photos are available online, for many people it meant sleepless nights, spent in awe and countless discoveries. Let me introduce you to one of them—photos by Howard Sochurek, that he took in Moscow, during the Christian Dior’s collection show in July 1959. 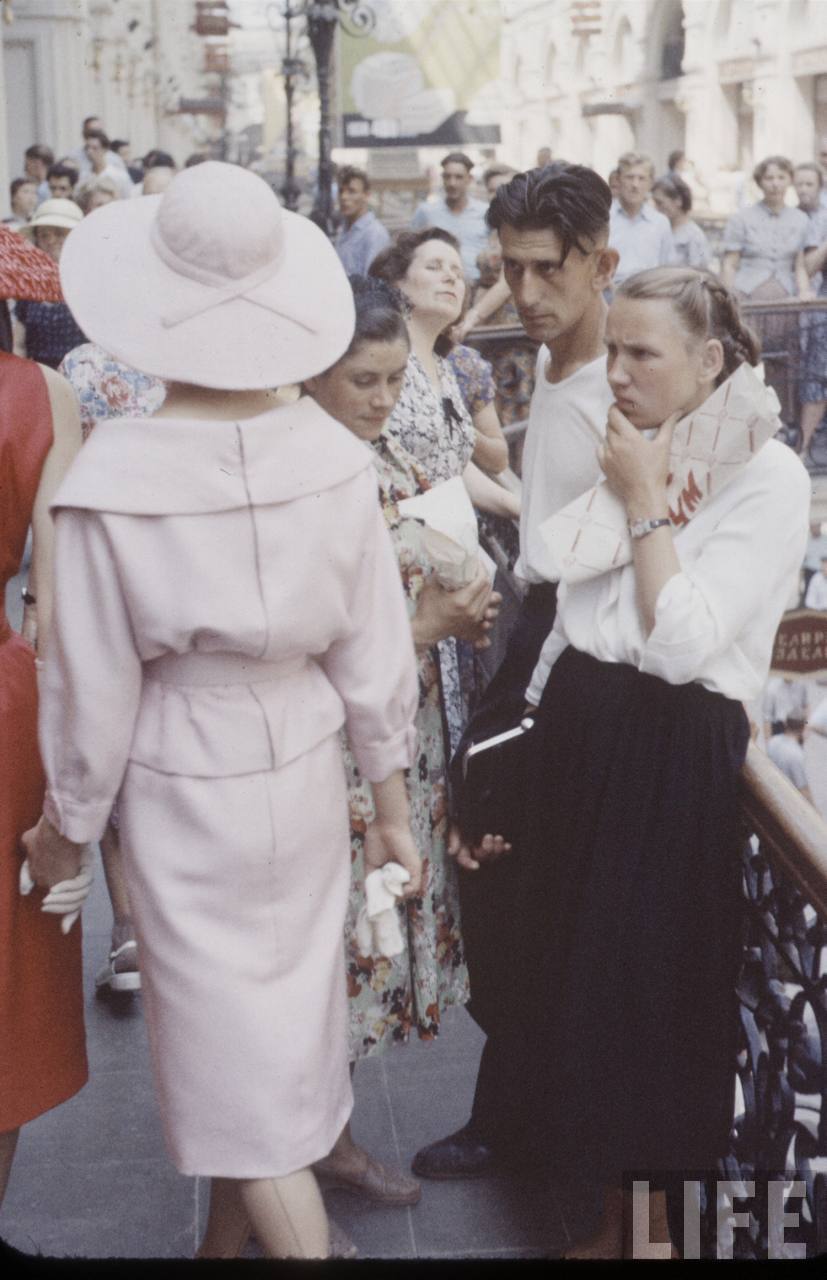 During the 1959, the Soviet Union officially allowed fashion shows, and stopped persecution of people in trendy clothes. That decision created a preferrable atmosphere and allowed Madame Suzanne Lulling—who was the Head of Dior Salon at the time—to organize a fashion show in Moscow. The show took place in House of Culture „Wings of the Soviets“, decorated in the french tri-colors. There were 11,000 invitations for „défilé“ which were sent only to the higher members of Communist party and to Soviet elite. 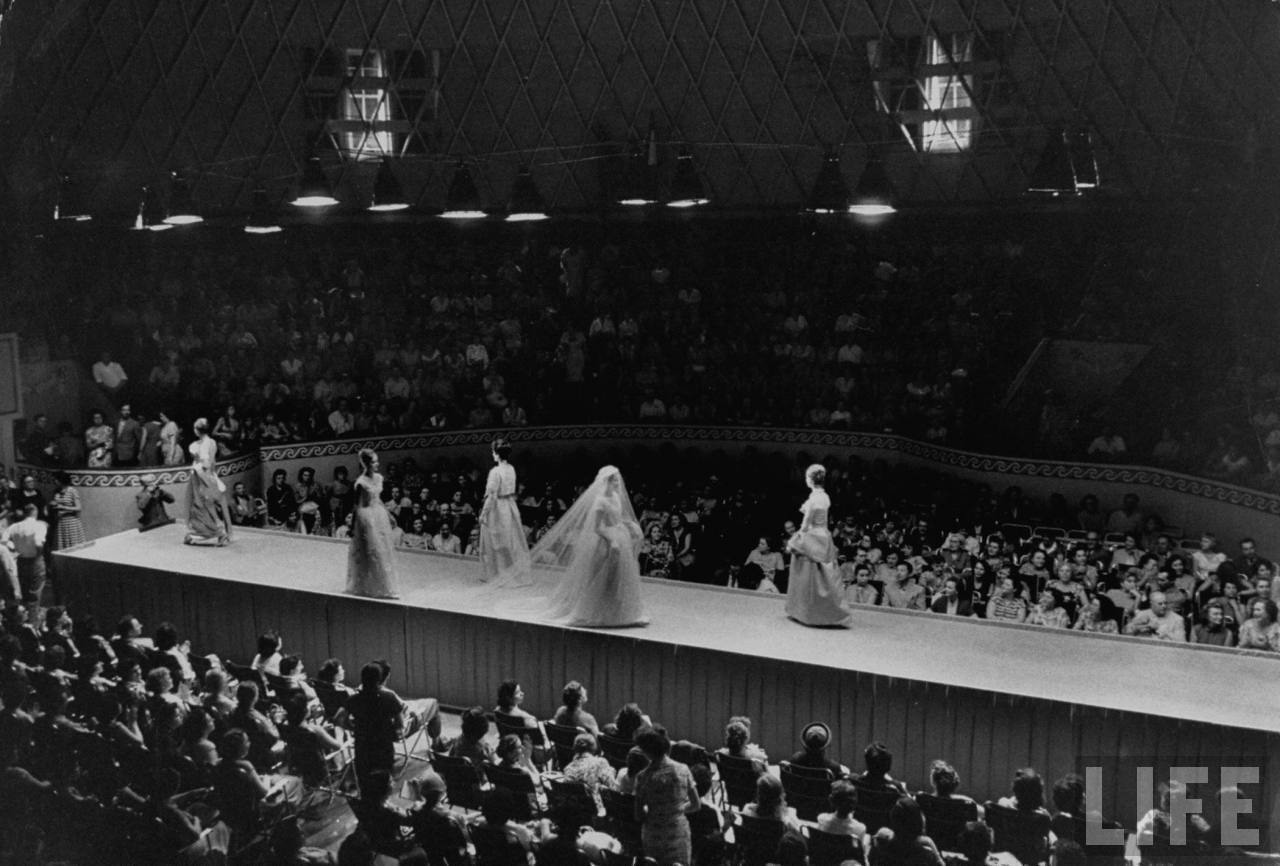 As a part of the show „teaser“, and to allow regular people to have a look at the models in „new look“ style, the organizators arranged a walk through the center of Moscow. They visited Red Square, local market, adjacent streets, and of course—„ГУМ“ ((GUM, reads like „goom“)—stands for Main Universal Shop). GUM was the center of Soviet fashion, and one of the spots you-had-to-visit while in Moscow.

3 out of 12 models took part in the walk, and Mr. Howard Sochurek (official photographer of the whole Dior event) was with them, ready to record all the amazing moments of the clashing cultures and fashions. 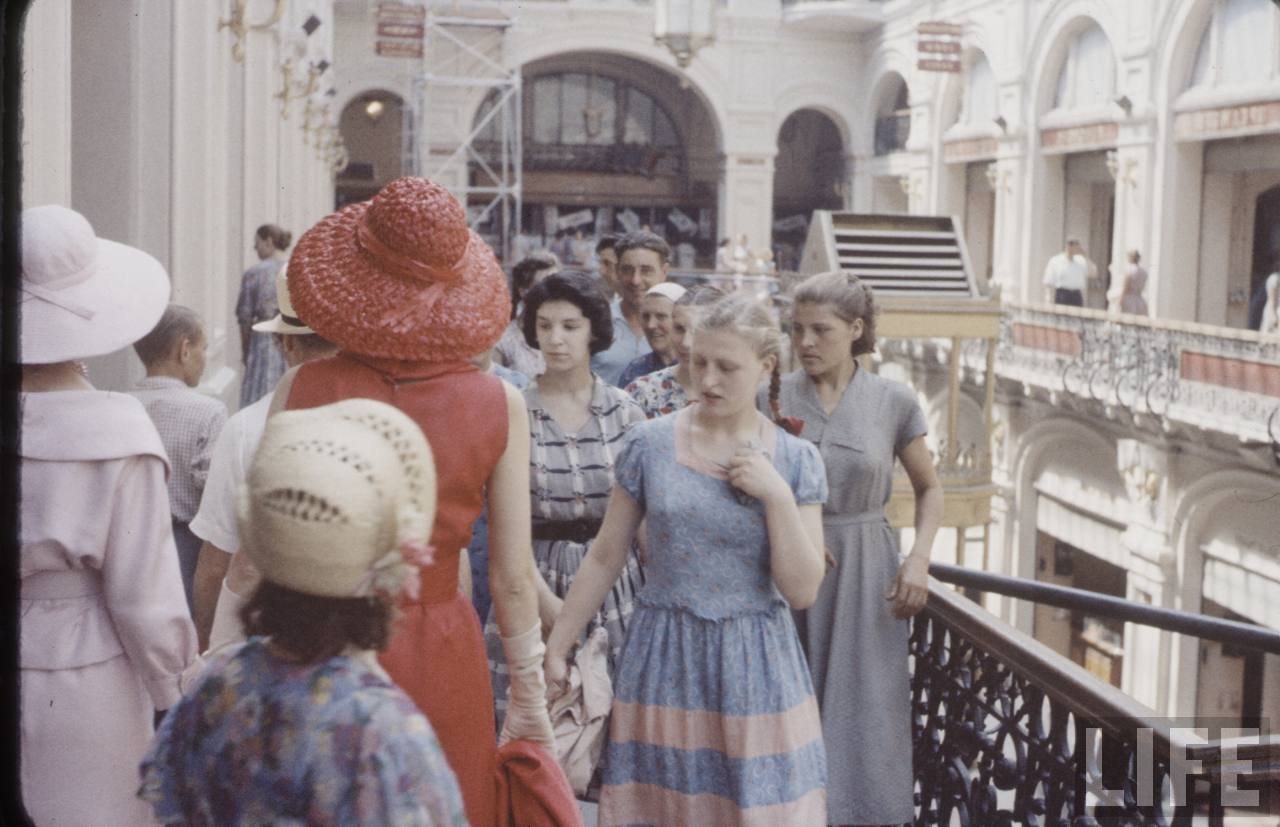 As Svetlana Smetanina of „Mowscow News Weekly“ depicted: „After the Dior fashion show, Pravda daily wrote that some of the styles were too open and short, and that „they would not look nice on women who are stout and of short stature.“ It was evidently taken for granted that the majority of Soviet women were stout and not tall. One of the Soviet magazines of those days described narrow skirts and spike-heeled shoes thus: „Bourgeois fashion makers come up with such styles that the woman has difficulty walking and must wrap herself around her man.“

Djurdja Bartlett, fashion historian and researcher with the London College of Fashion, has a non-standard explanation for the Soviet system’s „strong aversion“ to European fashion. According to him, the shifting fashion trends unwittingly personified the times; it posed a threat to the system, which valued stability above all.“ source 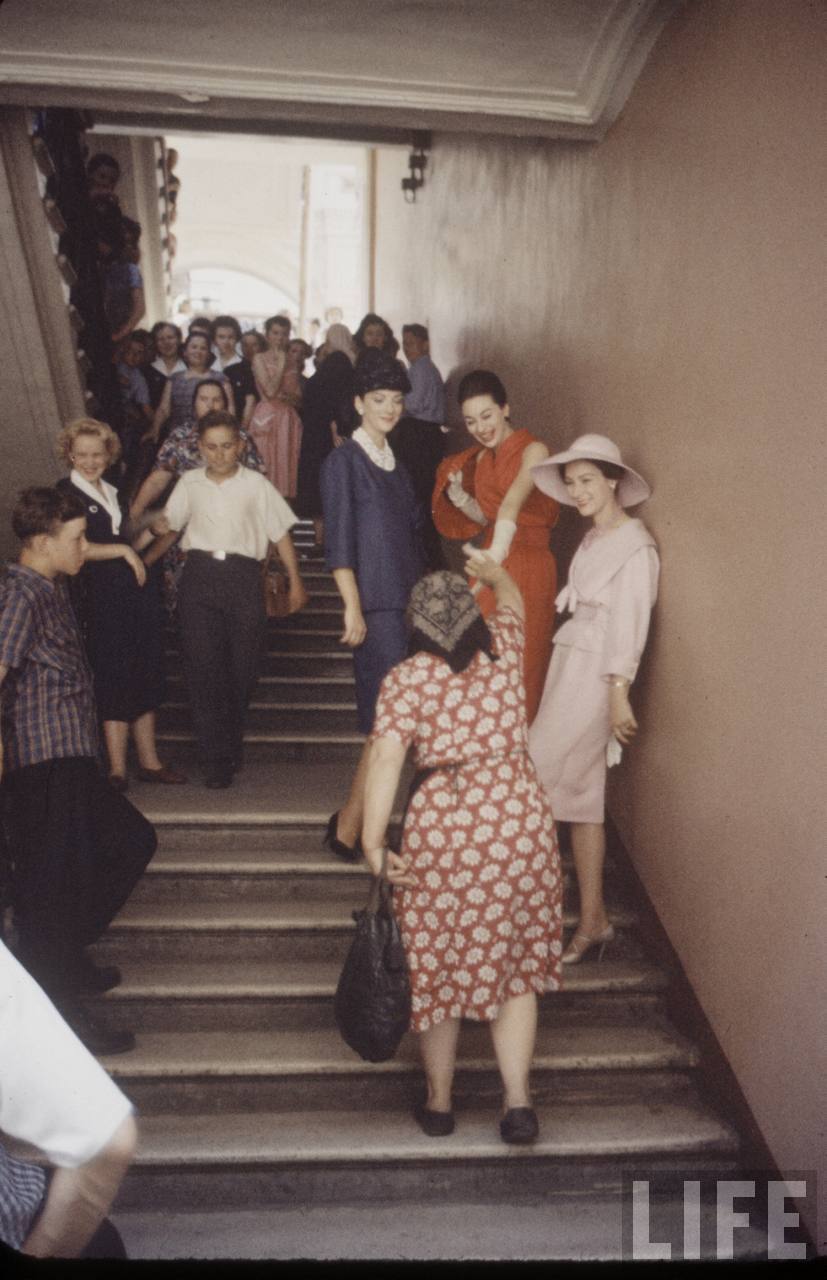 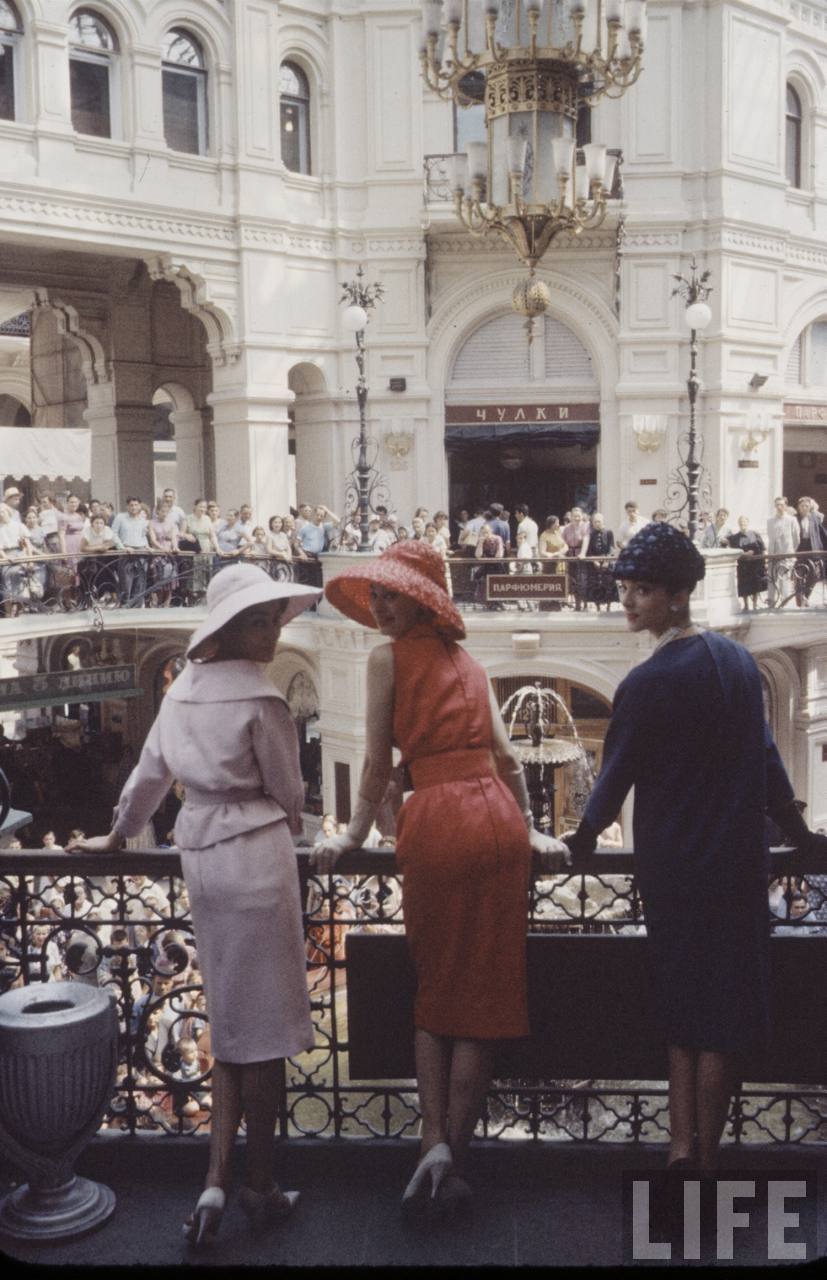 „Howard Sochurek joined Life in 1950 and worked in the Soviet Union, the Middle East, Mongolia and Vietnam. He also served in the magazine’s bureaus in New York, Chicago, Detroit, New Delhi, Singapore and Paris. He was with Life for two decades. In Korea, he parachuted behind enemy lines to photograph American troops in combat. In Vietnam, he covered the fall of the French garrison at Dien Bien Phu.
He became a freelance photographer in 1970 and was one of the first to use a computer to color and manipulate photographs and other images. His computer-enhanced images of X-rays and CAT-scans led him to extensive photographic work in the medical field. Physicians and drug and other medical companies used his photographs in textbooks and advertisements.
Mr. Sochurek graduated from Princeton University in 1942 and in 1960 was awarded a Neiman fellowship to study at Harvard University. He was an Army veteran of World War II.“ source

His „New York Times“ obituary, which was published on April 29, 1994 stated: “ Howard Sochurek, a photographer for Life magazine on assignment throughout the world and later a pioneer in computer-assisted imaging, died on Monday in Jackson Memorial Hospital in Miami. Mr. Sochurek, who lived in Boynton Beach, Fla., was 69. The cause was liver cancer, said his wife, Tania.“ source